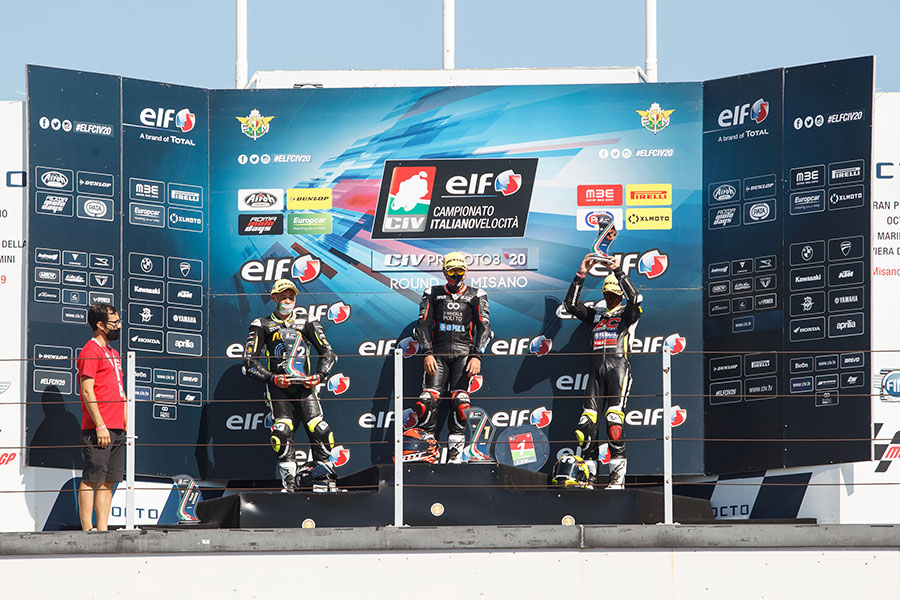 The second race of the Italian Championship CIV 2020 took place on the last weekend of July at the Misano circuit, which has been hosting MotoGP races for the last 13 years.

Vasilis Panteleakis traveled to Italy without knowing the aforementioned track, which he entered for the first time on Friday, a few hours before the two races of the Pre Moto3 category, in which he participates this year with the AC Racing Team.

The first sessions on the track were rainy and so the Greek rider lost a lot of time. This, however, instead of disappointing him made him even more determined and hungry for success!

On Saturday, during the qualifying sessions, he showed his rich talent and his ability to cope with difficult situations. Despite having the fewest laps of any rider on the track, he achieved the 6th best time of the day, among 30 riders!

Saturday’s first race would last 14 laps and took place on an extremely hot track, as the temperatures on

the asphalt exceeded 50ο C. Vasilis’ start was not good and in the first laps he dropped to 7th place and remained last in the group of four drivers who were fighting for 4th place.

Then he increased his pace and after making his best time in the race, which was eight tenths (!) below the time he had achieved in the qualifying session, he started to gain ground. With confidence and faith in himself, Vasilis masterfully carried out his attacks on his opponents, leaving them unable to react. In the last stages of the race he managed to create a big gap to the rest of the field and only one driver was between him and the podium!

This time his goal was the top step of the podium! Four laps before the end he saw an opportunity and attempted a spectacular double-overtaking, but unfortunately he collided with his teammate and lost three seconds.

He studied his opponent carefully for 4 rounds and when he saw the opportunity, he made a wonderful pass for the third place! He immediately started to push, showing similar pace to the ones fighting for victory,

taking a convincing 3rd place with a 2,5’’ gap to the fourth driver! It was a historic result and the first time a Greek driver reached the podium in the CIV Italian Championship!

The second race in Misano was held in similar conditions to the first. A good start saw Vasilis move into the first group of 12 riders fighting for the top spot. His lines were impressive and equally impressive was his tactical approach in the first half of the race. He began the second half knowing that he was faster than his opponents. He quickly climbed into the top three and he realized that he was a bit faster than his opponents.

This time his goal was the top step of the podium! Four laps before the end he saw an opportunity and attempted a spectacular double-overtaking, but unfortunately he collided with his teammate and lost three seconds.

Although he lost several places, he soon found himself once again fighting for the win. With only two laps remaining, Vasilis attempted again a second double-overtaking and yet again he collided with one of his opponent and crashed. Though he couldn’t finish the race, he was definitely among the standouts of the Pre Moto3 category in the Italian Championship.