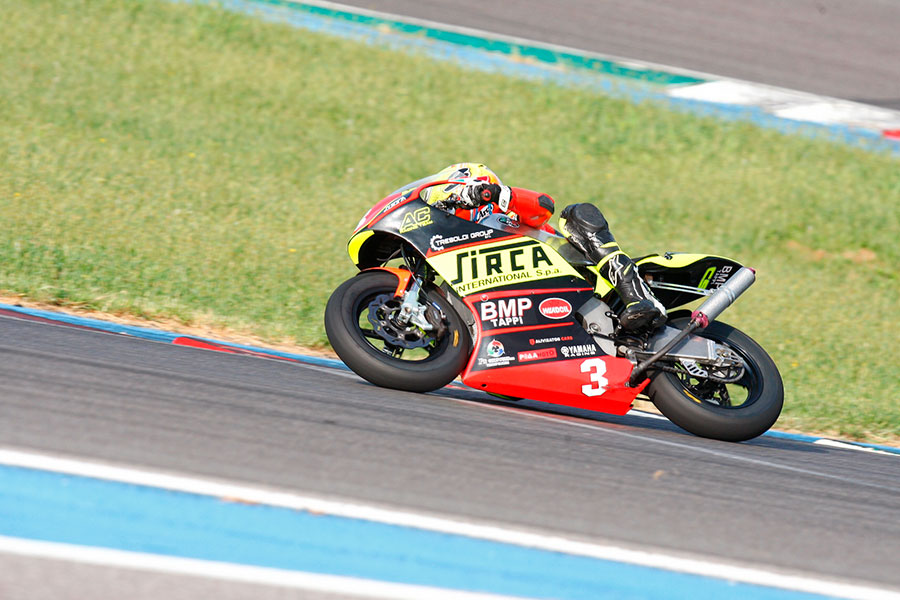 Vassilis Panteleakis, the Greek rider competing in the MiniGP top division this past weekend, continued his dynamic presence at the Italian championship.
The race took place on the Franciacorta track in Italy and was the last for this season.
The first freestyle took a bit of adjusting after the big summer break, but he quickly showed his good face and in the first leg of the qualifiers, on a track full of water, managed to make the 3rd year among 20 riders!

In the second leg he landed almost 3.5 seconds of his time, as the track offered much better grip and climbed up to 6th place, half a second away from the first set of starts.
Sunday’s first race was declared dry, although the track had plenty of moisture in various parts of it. Basil did – in another race – a great start and within a few meters had climbed from 6th to 4th place.

The front group consisted of 12 drivers, with fights and overruns that even this Moto3 World Championship would envy!
Vassilis Panteleakis’ speed in the corners was stunning, staying on the podium until the end despite losing to his lightest opponents.
In the final stages of the race the two fronts had made the difference and 4 drivers claimed the last podium position.

Among them, Vassilis, who made it all the way to the final turn of the final round, made a spectacular run, climbing to 5th place and eventually losing the podium to just 4 tenths, having the third best time in the race with less than three. tenth of the first!

The second race was even tougher in combat than the first, with Vassilis still standing superbly throughout, being in the top six which – in the end – had only a second difference!
The track was in better condition and the times were well over, with the Greek rider again having one of the best times on the track (7th), finally finishing in 6th place, losing the podium for three tenths of a second!

This strong presence also ended this year’s season for Vassilis Panteleakis, who eventually finished 7th in the MiniGP top division rankings, with 23 appearances, scoring 79 points in 10 games.
The team and Vassilis want to thank the sponsors for their valuable support throughout the year, as well as all the Greek fans who support him in their own unique way.

“In the previous match I was very happy because I did my best in the Italian championship, but today we managed to raise the bar even higher! The intensity of the races and the fights with my teammates taught me a lot about continuity. I had a lot of fun and as soon as my bike was perfectly positioned, I was able to fight with the top class and chase the podium. We have come very close, but I am not disappointed. I want to thank my family for the many sacrifices it has made for me, my sponsors for their support, and all the Greek fans for their love. “