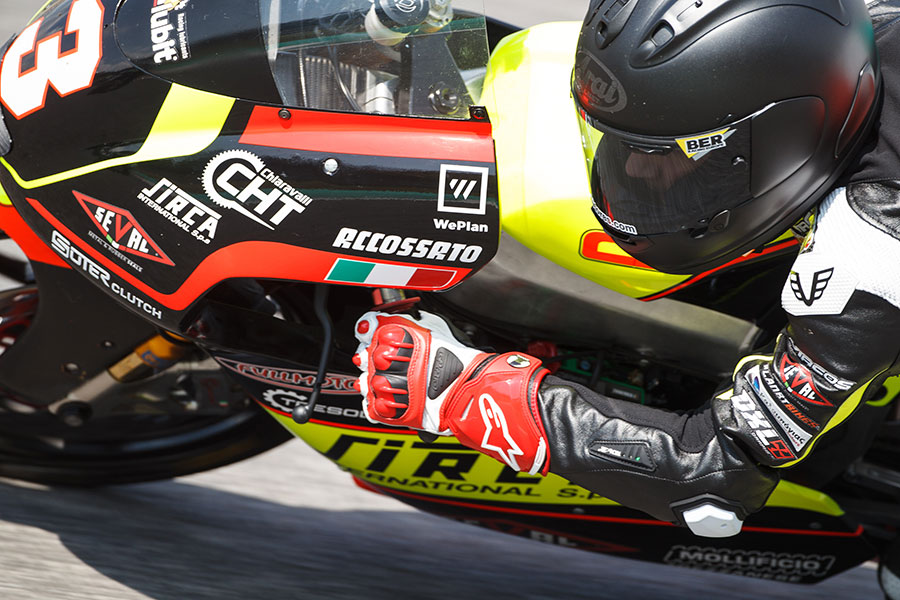 The debut of Vassilis Panteleakis in the new category of the Italian Championship (Pre Moto3) in which he competes this year, took place at the beginning of July at Mugello, a well known track from the World Championship.

The adaptation of Vassilis was very good and he managed to stand out from the very first day, marking the 7th best time among 32 drivers, while his difference from the first was only one second!

In Saturday’s qualifying practise, he managed to further reduce his difference from the first rider in the first place to eight tenths and consequently he started the race from the third row on the grid! In fact, he was the best among the three drivers of his team in the Pre Moto3 category: AC Racing Team.

In the first race he couldn’t make the start he wanted and lost several places, falling to 14th. However, he quickly found his rhythm and started to mark times similar to those he had done in the qualifying practice (2:07).

In the second half of the race he impressed with successive overtakings and managed to climbe in the group of four drivers who were fighting for the 9th place. In the last part of the track and especially in the last two corners, Vassilis had the upper hand and keeping his defensive lines in a masterful way, he fought bravely and in the end he managed to emerge victorious in this battle and take 9th place.

It was a very strong debut for the young Greek rider, who managed to overcome the difficulties and impress in this new chapter of his career.

In the second race he was more prepared and full of confidence after his successful debut. This time his race start was almost perfect and Vassilis was immediately thrown into the fights for the 5th place of a large group of drivers. Despite losing up to 8km/hr on the huge straight line (over 1,100 meters) the Greek rider was compensating that loss gaining ground in the turns.

He showed great stability, especially in the second half of the race with consecutive laps at 2:07, and as a result he completed the race in an impressive way, crossing the finish line in 5th place! It was a very strong debut for the young Greek rider, who managed to overcome the difficulties and impress in this new chapter of his career.